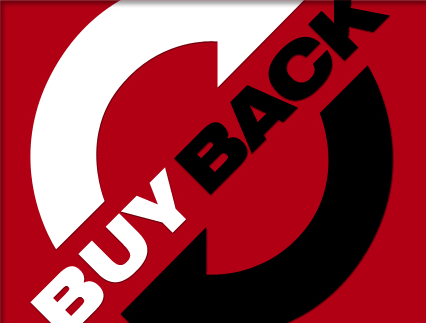 Buy back of shares is becoming a very effective mechanism of rewarding the investors in India. Almost all the major listed Indian IT companies have opted the route of returning the excessive cash on balancesheet.

Share buyback means the shares issuing company pays shareholders the premium (in most cases) in addition to market value per share and reduces the floating stock in the market to re-absorb the portion of its ownership.

Why do companies buy back ?

If the companies donot foresee big capital expenditure in next few quarters, the cash gets piled up in their accounts. So, either they use the cash for acquisition or for rewarding shareholders through dividends or share buybacks to maintain return ratios

Companies also buy back shares when there is a significant erosion in their stock price, but its growth prospects are good. The recent spate of buybacks by PSUs suggest the same.

Buyback is a more tax-efficient way compared to other means of rewarding shareholders, like dividend distribution.

Most Indian companies are doing a buyback for tax planning reasons. Dividend payment attracts a 15 percent dividend distribution tax. In addition to this corporate tax, individuals receiving dividend above Rs 10 lakh pay a dividend tax of 10 percent. A significantly good amount of taxation goes to government treasury in case of dividend distribution.

There are two prominent methods of buying back shares from existing investors.

Mindtree Consulting (MNDQY) reacted in July 2017 and announced the stock repurchase plan and returned close to $40 Million to its shareholders. In November 2017, Infosys (INFY) followed the footsteps and repurchased the stocks worth $190 Million. Tata Consultancy Services (TTNQY), India’s largest software exporter announced the buyback in 2017 followed by another buyback offer in 2018 returning back close to $470 Million to its shareholders. In last two years, the technology companies have been showering surplus cash on shareholders instead of parking it in liquid assets.

What are the reasons for sudden shifts in the payment patterns ? Lets analyse.

Carrying excessive cash on the balance-sheet has got negative history in the technology space. Almost a decade back, investors in Satyam Computers (TECHQY) revolted against the decision of acquisition of real estate companies. According to the balance-sheet there was excessive cash parked in fixed deposits. Investors wanted the surplus cash to be utilized for the growth of the business; however the cash in hand was completely non-existent. Investor’s revolt lead to exposing India’s biggest accounting scam.

Whether it is matter of perception or the real business need, since then technology companies are found to be cautious about hoarding cash on the balance-sheet.

Excess cash on the balance-sheet often indicates that the management does not have good growth ideas, or that the business reached the saturation point or it could be a fictitious cash as it was found in Satyam’s case. Too much cash is also likely to attract investor activism. Its not a good idea for the technology companies to be in lime light for wrong reasons. Hence the companies don’t want to take chances to create a reputation risk for their brand.

More than the perception, this shift in payment style can be attributed to the business needs. Consider the example of Accenture Plc (ACN). Accenture’s Return on Equity would have been much lower, assuming it hadn’t bought back the shares it did since 2003. Ccompany’s earnings per share grew faster than its net profits because of buy back.

Above charts indicate the steady growth of share prices of Accenture’s stock. They have missed the revenue estimates on at-least 6 occasions in last 18 quarters.

It is cheaper to buy shares now for companies and at the same time less lucrative to park cash. Repurchase leads to reduction in the floating capital. It affects the denominator and earning per share improves. Maintaining the same Price/Earning ratio, theoretically, the share prices are boosted up. When the IT bellwethers reach the saturation points buyback makes double sense for these companies.

Parking cash generated out of the business with banks or mutual funds is no different from average individual’s activities who is risk averse. Instead of investing in the shares of the companies, investors can directly park that money in fixed deposits or mutual funds or bonds. Hence, handing over the excess cash that is not required for business expansion or acquisition to shareholders makes more business sense.