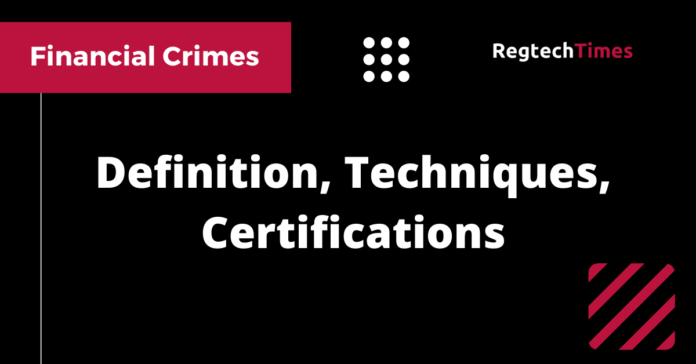 Banks are the backbone of the economy. They drive the operations of the financial sector, money market as well as the economic growth. Globally, financial criminals have been targeting the banks to optimize their illegal gains.

Criminals use innovative techniques to carry out financial crimes in Banking Sector. Banking Industry is not 100% secured against such threats. There is certain level of preparedness in associating with the fraud risk that takes place in the banks as a whole.

There are different ways to control these Fin-crimes. One can educate and train the citizens about the fraud prevention, to make the laws and regulations stringent, follow fraud mitigation and Fraud Prevention practices to curb down the financial crimes in banking sector. But to understand Financial Crimes in Banking Sector let us first go through definition of Financial Crime.

According to globally accepted definition it is crime which generates the benefit illicitly or preserve the illicit benefit already generated and obtained.

A Financial Crime in Banking sector is the misuse of money, assets, the property owned by any financial institution. For example money obtained from the depositor fraudulently posing as bank or employee of financial institute. Banking fraud is a criminal offence in India. In the case of legal purposes credit unions and banks are also included that are federally insured.

This includes Federal Reserve banks, the Federal Deposit Insurance Corporation (FDIC), mortgage lending agencies, and other institutions that accept deposits of money or other financial assets. Bank frauds are involved basically to defraud the financial institution.  From a simple cheque fraud to credit card skimming, it has a wide range.

Reserve bank of India defines banking fraud as an act of commission and abatement, which is intended to cause illicit gain to a person, entity and wrongful loss to the other, either by way of concealment of facts by deceit or by playing a confidence trick.

Banks not only face the financial loss but may also lose reputation. Though banks report most of the frauds, many go undetected. Monetary loss and damage to the reputation & goodwill of the bank are most direct impact of frauds. Serious aberration & misapplication resulted into fraud will definitely raise question over tenability & utility of secured technological capabilities of the institution and their traditional method of protection.

Fraudulent activity will also subvert the profit & overall efficiency of banking services. It can corrode the productivity and adversely affect the interest of investor resulting into unexpected increase in operational & capital risk of the bank. Even, the extent of default in lending process has become so serious that it overburdened the securitization company. Because of the adverse effects of banking frauds in our country, it destroys the economy of the nation as well as its sovereignty.

Financial Crimes in the banks include frauds, money laundering, diversions of funds, forgery, bribery etc. Additionally, these crimes result in the accounts turning non performing. It also enlightens the rapid impact on the profitability of Indian Banking sector as whole.

In 2015, RBI has introduced a new mechanism for the banks to keep check on financial crimes. It introduced Central Fraud Registry. Reserve Bank of India (RBI) is regarded as central policy making and national-level regulatory body that keeps eye on over the entire banking industry as whole.  The banking industry in India designates the rapid increase in the financial Crimes are inevitable part of the business now a days.

Bank frauds increased more than two fold on delayed detection even as the RBI gave a mandate on the early warning signals by lenders. In 2019, banks faced frauds worth Rs.71500 crores. However, in the year 2020, amount of the bank frauds crossed Rs. 1.85 lakh crore.

RBI directs, banks to implement preventive measures. Further, banks implement internal controls to curtail the occurrence of banking frauds. Banks also frame their internal policy for fraud risk management and investigation. Financial crimes have become a priority issue for the banks. CEOs of the banks take interest in this subject and board is required to accord their consent to the anti fraud efforts. They are involved and also have a peculiar focus on the Fraud Prevention and the Management Function. Banks also report the frauds in the foreign branches to their Indian regulator.

Certified Bank Forensic Accountant is a unique certification. It offers a number of benefits to the aspirants. CBFA is premier certification in Financial Crimes domain. This program covers wide array of subjects dealing with the loan frauds, credit card frauds, money laundering etc.

Only those students who score more than 75% marks are successful. They use the Certified Bank Forensic Accountant qualification after their name.  Hence, this course is an exhaustive course which will cover all the aspects from start to end process in Bank Fraud Investigation. Kindly click here to know more about CBFA.

Three frauds that shook the market