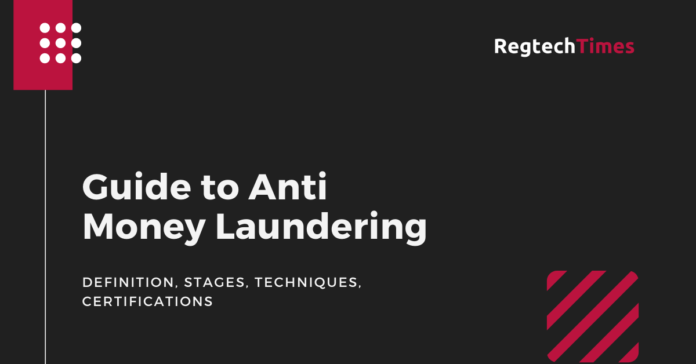 Predicate offenses such as drug trafficking or terrorist activity, corruption, fraud generate dirty money. It originates from illegitimate source. The money from the illicit activity is considered dirty, and the process “launders” the money to make it look clean.

According to some estimates, every year the money laundered out of India is more than Rs. 15,55,000 crores. It is a huge amount and poses a significant policy concern for government. As a result, governments and international bodies have undertaken efforts to deter, prevent, and apprehend money launderers.

As a result of these efforts an inter governmental body was formed under the name of Financial Action Task Force (FATF) in July 1989. Its primary role was to develop measures to combat money laundering. FATF require banks and financial institutions to report the suspicious transactions in Suspicious Activity Reports.

Financial institutions have likewise undertaken efforts to prevent and detect suspicious activities involving dirty money. Both as a result of government requirements and to avoid the reputation risk involved.

Prevention of Money Laundering Act was passed in India in the year 2002. Currently, this is the only weapon in the fight against money laundering in India. The act was amended in the year 2012 and amended version removed the threshold requirement of the crime.

Director of Financial Intelligence Unit – India (FIU-IND) is empowered to impose fine on financial institutions. Year 2021 began with FIU’s strict action against Paypal India. FIU wants Paypal to pay a sum of Rs.9.6 million. This was a path breaking judgement.

RBI, SEBI and Insurance Regulatory and Development Authority (IRDA) have been brought under the purview of PMLA, 2002. Hence, the provisions of this Act shall apply to all financial institutions, banks, mutual funds, insurance companies and their financial intermediaries.

There are three stages of money laundering. Typical laundering operation goes through all of these three phases.

At this stage, the launderer introduce the proceeds of crime into a legitimate financial institution. This is often in the form of cash deposits. This stage carries highest risk in the laundering process. Obviously, Launderers have to be innovative to deposit large amounts of cash.

Large cash transactions into the bank accounts raise suspicions. In the United States, Bank Secrecy Act requires financial institutions to report high-value transactions. Many launderers prefer to split the transactions to make it look from a legitimate source.

Second phase is Layering. This involves sending the money through various financial transactions to change its form. However, this makes it difficult to trace. Layering consists of moving the funds through multiple bank accounts.

In the layering phase banks witness continuous withdrawals, changing currencies, transactions with foreign jurisdictions. Money travels through various bank accounts. This is the most complex step in laundering process. It’s all about hiding the money from law enforcement agencies.

At the integration stage, the money re-enters the legitimate financial system. But it appears to come from a legal transaction. Sometimes the launderers initiate cross border transfers of money to the account of a local business. These transfers are disguised as investments.

Additionally, investments in startup company, exempt under income tax is a trending technique of integration.

Purchase of a million dollar painting from a company owned by the launderer is becoming trending topic. At this point, the criminal can use the money without getting caught. It’s very difficult to catch a launderer during the integration stage if there is no documentation during the previous stages.

Who benefits from Money Laundering ?

Let us discuss the real life scenario of money laundering. Let’s say you just earned a couple of million rupees of cash by selling illegal drugs. Of course, you can spend it on small cash purchases and usually nobody would notice. But when it happens occasionally, you have a problem.

However, you can’t really use the cash for purchasing, a luxury car, a real estate or a legitimate source without being reported.

So, you buy a lottery ticket. This lottery ticket has won the prize of Rs. One Crores. You bought the ticket for Rs.1.05 crores. Yes, you paid excess money.

But since, you are able to use the illegal money to invest, Rs. 5 lacs is just the cost of service.

With that pre-won lottery ticket, you now have one crore rupees in your bank account. You can legally spend on anything you want. You just ran lucky with a lottery ticket.

There are many techniques to change color of the money. These techniques help launderers to disguise the source of illegal money. Here are some of the examples.

Crypto currency laundering poses a greater challenge before the Compliance officers in the year 2021. Moreover, non compliant crypto exchanges and DeFi are the new techniques of laundering.

Though, all the transactions are available in public registry, tracing them back to the beneficial owner is not an easy task. The digital currency knowledge base have different resources on the subjects of

Certified Digital Currency Expert is a new initiative on the topic of crypto currency money laundering.

The Certified Anti-Money Laundering Expert (CAME) is a popular Indian program. CAME is a expert level and a practical course. It gives you a solid understanding of core KYC AML principles. At the same time, it is one of the promising programs in Asian countries.

Also, CAME offers the video learning modules like TBML, Shell Company investigations etc. This course is attractive for the compliance professionals from middle eastern countries. In addition, the module on money services business is a distinguishing factor of this program.

Customer information is collected when an account is opened. This information helps the bank to know the customer, his source of income, his business etc. Customer risk-rating models are one of three primary tools used by financial institutions to detect money laundering.

Financial Institutions have deployed complex risk models. However they are based on an assessment of risk factors such as the customer’s occupation, salary, and the banking products used.

This training program combines the benefits of e-learning with professional course. Aspiring candidates have many options to test their knowledge on AML concepts. And here is the list of simulated exams on compliance topics

Simulated exams for the aspirants of the Certification course offered by Indiaforensic can test their skills on Simulated CAME Exams. Additionally, there are mock tests available on the subjects like TBML, KYC, FATCA and CTF. These are free examinations but require user registration.

Introduction The Indian economy is reliant on banks. As a result, the financial sector is the most susceptible to deception. In India, financial fraud...